Pro MEdia Mom
Hello and welcome to the site! I am Renee, "Mompreneur," wife, singer and lover of life! I am somewhat of newbie in the blogging community, but I love to talk and write so I should be right at home in this space. I am a pet lover--I have one cat, so I guess that qualifies; I enjoy spending time with kids simply because they are entertaining; they are truth tellers. I am fascinated by their ability to transform or lift any spirit with laughter; I am always in awe of their ability to learn and adapt to new media. In my free time,I read, cook, listen to and learn Standards through You Tube. I am a big jazz music fan -BIG! I love to dance to the music of life-juggling family, and managing my emerging brand for a kids music and education program. When I am not busy doing all of these things, I spend quality time with my family and friends

Telling Stories Essay Assignment: The Blind Men and the Elephant

SYNOPSIS AND HISTORY OF BLIND MEN AND AN ELEPHANT

The fable of Blind Men and an elephant originated in India. It is widely thought that the original story originated in Hindu lore. I could not find any reference to the date of the story’s creation, but in the 19th century the poet John Godfrey Saxe (1816-1887) translated it to the English language and created his own version [“The Blind Men and the Elephant”] as a poem. “Since then, the story has been published in many books for adults and children, and interpreted in a variety of ways.” [1]

THE STORY AND SOCIAL THEMES
Versions of the story have been used in the Buddhist, Jain and Sufi Muslim cultures. In modern times, the story has become widely used in philosophy and religion classes, and is also used to illustrate the need for religious tolerance. The fable tells of the quest for knowledge sought by six blind men in an attempt to best describe what they believe to be an elephant. The poem is like a puzzle to which each man holds a piece. It is written in the style of a poetic ballad. The speaker, who narrates from an omniscient point of view, uses figurative language and symbolism in the poem, which requires that each reader uses his/her own imagination to visualize the blind men; for no physical descriptions of the men are given--only of the elephant. However, much is learned about each one from their observations.
The story illustrates how people form their reality and belief system on their limited experiences. In other words, perhaps each religious faith only holds truths that make up one part of God.  The story is also used to teach tolerance for other cultures. We only “see” the culture in which we are immersed. The poem illustrates how perception is based on what a person is able to see or touch. In the story, six blind men touch an elephant. Although each man touches the same animal, his determination of the elephant is based only what he is able to perceive. The poem warns the reader that preconceived notions and perceptions can lead to misinterpretation.[2]

And so, I present to you John Godfrey Saxe’s version of The Blind Men and the Elephant.

“Blind Men and the Elephant
Poem by John Godfrey Saxe (1816–1887)
It was six men of Indostan
To learning much inclined,
Who went to see the Elephant (Though all of them were blind),
That each by observation
Might satisfy his mind

The First approached the Elephant,
And happening to fall
Against his broad and sturdy side,
At once began to bawl:
“God bless me! but the Elephant
Is very like a wall!”

The Second, feeling of the tusk,
Cried, “Ho! what have we here
So very round and smooth and sharp?
To me ’tis mighty clear
This wonder of an Elephant
Is very like a spear!”

The Third approached the animal,
And happening to take
The squirming trunk within his hands,
Thus boldly up and spake:
“I see,” quoth he, “the Elephant
Is very like a snake!

The Fourth reached out an eager hand,
And felt about the knee.
“What most this wondrous beast is like
Is mighty plain,” quoth he;
‘Tis clear enough the Elephant
Is very like a tree!”

The Fifth, who chanced to touch the ear,
Said: “E’en the blindest man
Can tell what this resembles most;
Deny the fact who can
This marvel of an Elephant
Is very like a fan!”

The Sixth no sooner had begun
About the beast to grope,
Than, seizing on the swinging tail
That fell within his scope,
“I see,” quoth he, “the Elephant
Is very like a rope!”

And so these men of Indostan
Disputed loud and long,
Each in his own opinion
Exceeding stiff and strong,
Though each was partly in the right,
And all were in the wrong!"
http://www.wordfocus.com/word-act-blindmen.html

MORAL
To paraphrase, “when you look at the fingers on a hand all you see are fingers, but when you fold those fingers together to make a fist, then you have something mighty that represents strength.” What the six men did not realize was that they had more power collectively. As previously observed, the poem is like a puzzle to which each man holds a piece.

WRITING ASSIGNMENT
I was assigned the task of retelling a story, so I decided to take on this old fable, giving it a modern twist by inserting GOP candidates of the 2012 election. Is not winning the nomination and public approval the necessary element for solving this puzzle? Well, let’s examine which one of our four has the winning formula in my version of the story titled, “Four Candidates of the GOP and The People.” 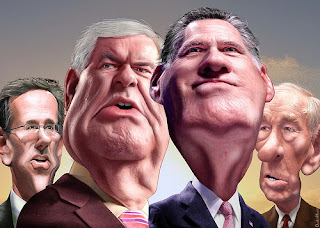 GOP Men
There were four men of the GOP
Ambitious, haters of Obama
Who wanted to be President so bad, that each would sell his mama!
So each one, by media kinds
Launched a plan to grab up all the fools
-All the peeps- that they could find.

The First, Mitt Romney, approached The People
while standing proud and tall -
Said, God bless me! But poor People...
We do not need at all!

The Second man, Newt Gingrich, declared, to the moon we’ll go!
And cried, Ho! What have we here?
And who but he should know?
Said, come on people, can’t you see?
Romney doesn’t care!
So vote for me and I’ll set you free!
And stop O-bama! Stop O! (Sung to Eddie Ruffin’s “Ball of Confusion”) 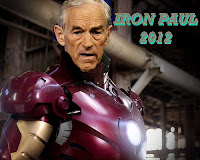 Now The Third man, Ron Paul,
Looked convincing, and appealed to their practicality.
He cried, you down with GOP! Yeah, you need me!
Even though I’m out of touch with reality.

The Fourth, Rick San (snore ‘em) Santorum
Speaks to the people, some say he’s even deep.
But most have no idea what he’s talking about,
So, they drift off to sleep.

And so these men of the GOP
Dispute with much disdain,
About what they think The People need,
And spend millions on campaigns.
So each one goes from state to state, and they visit every town;
But a run for the People’s vote in 2012? Sounds like they’re going down!"

MEdia in the Mirror

I began to understand the power of media the first time I saw the Barbie Townhouse. For me, Barbie was the representation of beauty, culture, class, popularity, wealth and success. She was "the girl with it all!" –or so it seemed through the view of cleverly, crafted television commercials- and who would not want to be all of those things? An excerpt from "Media As Industry", Introducing Media Studies by Scholar and Writer, Ziauddan Sardar examines how the Hegemonic Model works in regard to influencing and creating these types of false representations of the world through media. The reading examines how these representations begin to influence who we are; how we see ourselves; what we think. After all, my family did not live in a Townhouse, we did not own fancy designer clothes, and for my mom, there was definitely no Ken; but it did not stop me from dreaming. I digress. The Frankfurt School suggests, that “capitalist control of the mass media was one reason why capitalism survived in the post-war period.” The article discusses hegemony that is, the ability of the ruling class to rule by consent,” (telling us what to think).

Through Social Media we are seeing a shift from the Hegemonic Model to more of a Pluralistic Model, which describes the media as a reflection of the plural society, full of competing interest and different viewpoints.  “The main function of the media is to please the audience.  It therefore seeks to fulfill their needs, and its representations meet with their expectations.”  Sounds like crowd sourcing to me.

My relationship with technology began out a curiosity to better understand the influence of traditional forms of media (television, film, newspapers and magazines); to emerging platforms such as new media, electronic and now digital products; How they work to connect us faster, entertain us in the process, and even influence and/or change our perceptions of others; how we communicate. From the Fax (yes, I was around then), to the PC, and now Smart Phones, I remain intrigued. Many of my day-to-day tasks and personal communication are facilitated through the use of my iPhone, the Internet and increasingly, Social Media. I do not realistically see myself functioning in today’s world without these tools. We have moved from printing today’s headline on tomorrow’s papers, to instantaneously blogging, tweeting and receiving history-making news and information 24-7 from all across the globe.


With social networking, Internet video and online collaboration, future presidential administrations will need to become even more adept in public engagement from the digital perspective. The idea of the Pluralistic Model may prove to be effective in political strategy.  Many of these forms of communication may be considered art simply due to the use of collaborative ideas, in the same way that an advertising team brainstorms to create visual and print commercials.

The article also discusses and defines how cultural productions/products differ from mundane products.  It states that cultural products “contain meanings, values, ideas and are a form of communication [that] work on several levels.” Take the Montreal Jazz Festival for example, “some people attend the Montreal International Jazz Festival to see a specific show (artistic or central product), while others attend for the atmosphere (the experience).” Customers choose who they wish to see based on preferences such as who they wish to see, who has parking, or even which venue has a bar. I am only scratching the surface here. HEC Montreal. "Components ofthe Cultural Product"

In the future, digital technology, cultural productions and products will have even greater influence on relationships and culture by providing more access and readily-available information, through Social Media Platforms, Apps, Cloud-based software, QR codes, mobile communications and other “New Media” developments; but does that necessarily equate to better communications, and just how will our relationships and culture shift as a result?


I welcome your thoughts and comments on the subject.


McLuhan, Marshall. Fiore Quentin. The Medium is the Massage: An Inventory of Effects. Bantam Books, Inc. New York. 1967. P. 26. Print.
Copyright 2012. This adaptive work is the Intellectual Property of Renee Collins Georges. All Rights Reserved.
Posted by Pro MEdia Mom at 9:56 AM 1 comment: